Hell in a Cell Predictions: Charlotte vs. Nikki Bella for the Divas Title 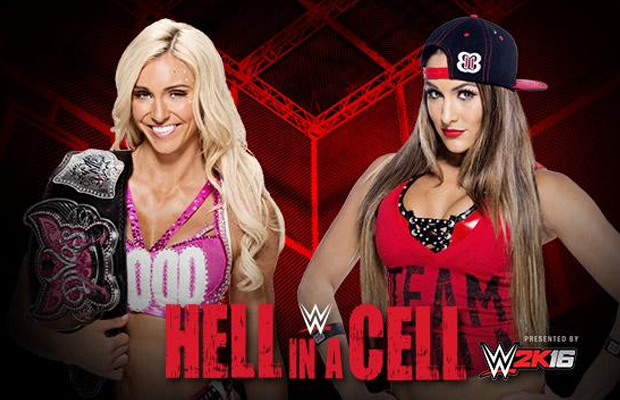 Tonight at Hell in a Cell, Charlotte defends the Divas Title against Nikki Bella. Will Nikki prevail in her rematch? The Diva Dirt team weighs in:

Chris: I really don’t have anything to say because these two haven’t really been “feuding”, Team Bella has been working mostly with Team B.A.D. and Charlotte has been focused on Paige and that situation. I’ll keep it simple and say Charlotte retains.

Erin: It doesn’t really feel like we’ve been building up to anything here. Nikki’s story’s really been about Team Bella vs. Team B.A.D., while Charlotte has been occupied with trying to deal with Paige. I really don’t see any reason for the title to change hands here: the half-assed booking for this match makes it feel like something the WWE felt obligated to do, like they had to give Nikki a rematch and they’re getting it over with before moving on to better things. It’s a shame, because a match like this shouldn’t feel like a waste of time, but it does. I think Charlotte‘s retaining here, hopefully to move on the a more interesting title feud with Paige.

Jack: This feud has been all about Charlotte, Becky Lynch, Paige and Natalya and whilst that has been somewhat interesting, it has meant that the title feud has taken a back seat. I honestly think WWE need to get rid of rematch clauses for most feuds as they quite frankly have no idea how to book programs between a title win and the former champions rematch. Another that strikes me as utterly boring recently is Kevin Owens/Ryback. But I digress. As WWE has seemingly not been interested in really pushing the emotional and personal envelope between champion and challenger, I see Charlotte getting the win and moving on to focus on Paige. I honestly see Becky being revealed as Nattie’s attacker, leading to Charlotte/Nattie vs. Becky/Paige and maybe then throw a Fatal Four Way between the two. That’d be cool.

Josue: Since the announcement of this Divas Title rematch, we’ve seen the Divas Revolution take a few twist and turns. There’s Paige’s shifting her attitude as a friend and foe to her once Team PCB group as well as the awaiting return of Natalya, only to have shortly be taken out by a mystery attacker. These bits of angles help keep things interesting but it feels like the title picture could have used more of the spotlight being that this is Charlotte’s first title defense. That being said, I predict Charlotte to walk out the winner and holding the title for just a bit longer.

Kyle: I’m gonna go with Nikki Bella winning back the Divas Title. It feels like Charlotte’s reign has been lacking that special feeling it is supposed to have and it’s really for the reason stated in Erin’s Night of Champions Review. I think Nikki Bella is the prefect antagonist for another (maybe more over “Boss-like”) challenger and may be aided via Paige’s interference in this match. I think we need a major curveball here or some kind of big event to take place leading to Charlotte being distracted/taken out so Nikki can get the Championship.

BREAKDOWN: 4 for Charlotte, 1 for Nikki.