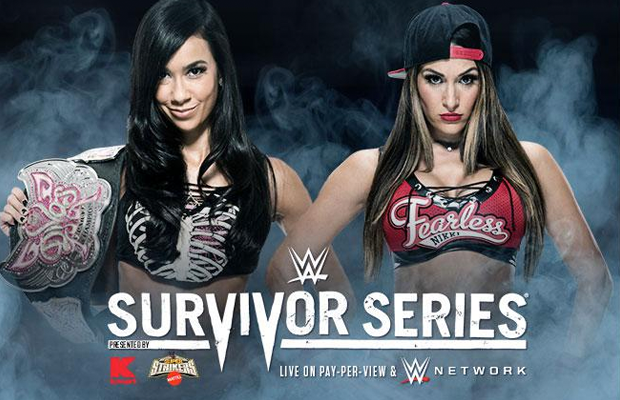 Tonight at Survivor Series, AJ Lee defends the Divas Title against Nikki Bella. Will Nikki’s personal assistant Brie tip the odds in her favor? The Diva Dirt team weighs in:

Adrian: With these rumours flying around about AJ’s possible departure, and Brie just days away from the end of her sentence as her sister’s assistant, all signs point to Nikki Bella getting her hands on the belt tonight. The Bellas’ feud needs a new sense of purpose, so having them at loggerheads over the title seems like the perfect way to transition their rivalry to its next stage.

Bobby: I’m not really into this feud to be honest, mostly because I had way higher hopes in terms of Brie being incorporated to make it stand out and I feel like that wasn’t capitalized on as much as it could’ve and should’ve been. In addition, I’m also not the biggest fan of seeing Divas dress up as each other in feuds anymore. Nevertheless, I want to see Nikki win eventually, but I have a different idea as to how, so let me elaborate and then watch as none of it comes close to being true! Tonight, I would visualize Nikki having the win in sight when Brie somehow accidentally distracts her long enough for AJ to latch on the Black Widow. Nikki taps and AJ Lee retains, leading to a promo on Raw where Nikki tries to fire Brie for not accomplishing the last task she was given, but because The Authority are no longer in charge, whoever is in charge throws out the entire stipulation and books a number one contenders match between the two. That match results in a double count out as they can’t stop brawling with each other around the ring, and that transitions into a triple threat at TLC where Brie hits the Bella Buster on AJ and Nikki throws her out of the ring to cover for the win. The two of them (AJ & Nikki) could rematch on either Raw or the Royal Rumble, with Brie somehow still closely involved. From there, we go into Brie vs. Nikki at WrestleMania! Now when we end up getting Natalya vs. The Bunny in a Total Divas Lumberjill BunnyMania 2.0 Interspecies match that has no actual contact and ends in strictly a roll up, just remember this idea and what could’ve been.

Chris: Since AJ got the upper hand on Smackdown I’d like to hope that Nikki would walk away with the victory. However, my gut tells me that Brie will cost Nikki the match, meaning AJ Lee will retain. Nikki goes to “fire” Brie tomorrow on Raw only for Brie to announce that the new General Manager had declared her personal services contract null and void. Brie attacks her sister and their feud continues.

Eleri: I’m torn down the middle here. On one hand I think Brie will screw Nikki over, prolonging their feud minus the title. On the other hand I foresee Nikki forcing Brie to help her win, leading to them fighting for the title. Not too sure where AJ fits in here, unfortunately. I’m going with door number two: Nikki Bella to win.

Erin: At this point, I think there’s more to gain from Nikki losing due to some Brie involvement (or lack thereof). She’s still in the midst of her growth as a heel, so while I think she would be a more than capable Divas Champion at this stage, I don’t think it’s her time just yet. AJ’s success over the past week has me wondering, though, because classic WWE logic would indicate that Nikki would pick up the win after being bested twice last week. Still, maybe this is building towards a breaking point for Nikki and Brie. Nikki losing would certainly accomplish that, leading to Brie’s “firing” or an all-out brawl between them once Brie’s sentence is over. Regardless, I think AJ Lee holds on to the title tonight. I’m sure it’ll be around Nikki’s waist very soon, though.

Jack: Although AJ’s third reign is only in its infancy, I’d like to see a title change here. Nikki can feud with Brie over the belt and AJ can go back to being more of a character with the guys. That’s what I’d personally like to see. Then after feuding with Brie, Nikki can defend the title against fresh challengers like Natalya, Naomi and Alicia Fox. Please win Nikki Bella!

Jake: I see AJ Lee getting the win over Nikki at Survivor Series. I feel like there’s still so much they can do with this feud…other than dressing up as each other which is pretty much the standard for any serious Divas’ feud. It’s Brie’s last day as Nikki’s manager so you know she’s going to cost her sister the match, especially since this week she FINALLY started to stick up for herself a bit. What I’m more interested in is the aftermath of all of this. I can definitely see Stephanie McMahon firing Brie again for not helping Nikki and Brie can get off the road for a few months before returning around WrestleMania to pick up her feud with sister, Nikki.

Josue: Putting all the AJ leaving rumors to the side, I’m going to say that AJ Lee will retain at Survivor Series. However, I think the bigger picture of this match will stem from Nikki and Brie’s storyline, as Brie will still be serving as Nikki’s personal assistant. Nikki will no doubt strive to use Brie’s obligations to win the title but as we near the end of Brie’s thirty day personal assistant clause, their feud will need to reach new heights and what better way then by having Brie cost her sister the loss during this title match.

Steven: With Brie’s servitude to her twin sister Nikki ending soon, I would bet that Brie would be challenging a newly crowned Divas Champion at the next PPV. That said, I don’t ever get it right when I bet against AJ, so I’m going with AJ Lee to retain tonight.