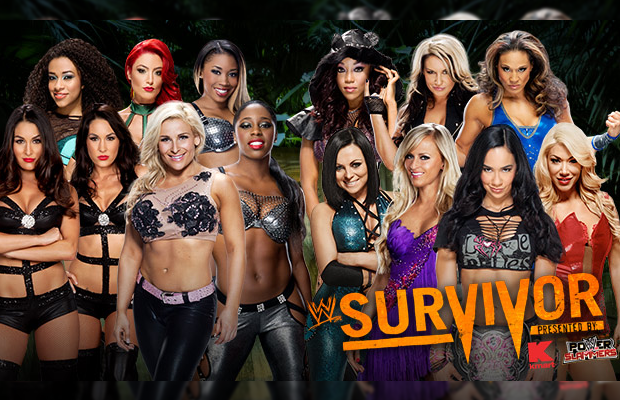 Adrian: After this week’s shambles I can’t say I’m too optimistic about tonight’s match. Although at least if it’s an elimination match there’s guaranteed to be more than eight seconds of ring time per contestant…right? Anyways, prodigal daughter Kaitlyn’s inclusion on Team True Divas is interesting, and the theorist in me can totally see her turning on AJ here and costing her team the match. However, I really don’t think creative have thought about it that deeply. I do think Team Total Divas will win, but something ridiculous’ll happen like Eva Marie being the sole survivor or something. At this point, is that even a particularly outlandish prediction to make?

Bobby: As much as I want to think WWE knows we all pretty much believe Team Total Divas is winning this and they’re deciding to do the unexpected swerve by having them lose, I just can’t see it happening. I don’t really have much to go into detail about with this match since it was built up extremely quickly, but I will say I’m beyond excited and so thankful it’s an actual elimination bout instead of just one fall. I really hope for some good stuff from Eva Marie, Summer Rae and JoJo in particular, and I’m also hoping for AJ/Kaitlyn tension. As far as who survives, I’m going to say Team Total Divas wins with Natalya and the Bella Twins remaining the sole survivors after Nattie makes AJ tap to the Sharpshooter.

Chris: Honestly, It’s really hard for me to get into this match. It just seems kind of thrown together at the last minute to get the girls on the PPV. I mean AJ has said herself that she needs no one besides Tamina, so why is she leading a bunch of girls that she doesn’t even get along with? What so happen is it comes down to the Bellas, Naomi & Cameron, and Natalya vs AJ, Tamina, and Kaitlyn. Tamina and Nattie brawl on the outside and get both get counted out. AJ tries to get Kaitlyn to double team one of the girls when the referee is distracted by the brawl outside, but instead of helping AJ, Kaitlyn spears her. Kaitlyn then walks out of the arena, getting counted out and allowing Brie Bella to pin AJ and getting the win for her team. This way you can refresh the AJ vs Kaitlyn feud, hell add Naomi in and have a triple threat at TLC. Just save us from this crap! Team Total Divas wins. Survivors: the Bella Twins, Cameron and Naomi.

Cryssi: I definitely have to go with Team Total Divas for this one. They’re on a tear at the moment, living the life, and I think it would be a shame if the WWE didn’t capitalize on everything they’ve done for the division. I think winning this match would be a nice touch since they won’t pull the trigger with the championship and it wouldn’t shock me to see it coming down to AJ and Natalya. I’ll go out on a limb and say they’ll be the sole survivors for their team along with Brie Bella, on Team Total Divas.

Eleri: I love each of the Divas (well, some less than others) but I wish, wish, wish we had more to go on with this one. Given the time and proper build up, this would be a serious feud because it sums up the divide in women’s wrestling fans right now. I’m going with Team Total Divas to pick up the win, and I expect Brie and Natalya to be the last women standing. If not, I do think one of the Bellas will inadvertently get the other eliminated, but I don’t know which way to go. I’m just glad Kaitlyn is back. Now if only they’d give her an actual character. But that’s a whole other issue. So yeah, Team Total Divas for me!

Erin: The momentum is clearly with Team Total Divas, and I don’t see them messing with the aura of success that show’s been generating. The team behind AJ and Tamina have gotten no real exposure out of this, so I don’t see them giving the win to a bunch of lumped together Divas. The real question is who will be the survivor(s). Natalya looks to have the best odds for getting the next title shot from AJ, so she definitely has to survive. She won’t be alone, though, so I’ll say it will be her and Naomi left at the end, with Natalya getting the last opponent to tap out to the Sharpshooter.

Jack: I’m Team Total Divas all the way! With a second series of the reality show confirmed, I definitely see the Total Divas winning to use as a storyline on the show. As there’s bonus points up for grabs if I can correctly predict the sole survivor(s), I’m going to say that Brie Bella and Natalya will be sole survivors. Both of them have been major competitors for AJ Lee’s Divas Championship over the last few months, and as both feuds sort of just ended before they properly even began (not a lot of storyline), I can see WWE picking up where they left off as opposed to creating a new challenger for AJ’s belt. That and I don’t think Eva Marie is anywhere near ready to be #1 Contender. Team Total Divas will win – you can’t stop them now!

Katelyn: Team Total Divas to take the win here… with AJ Lee to be the last one eliminated, probably by Natalya. I’m thinking that there will be more than one competitor left on the Total Divas team too and that AJ will realize that she has nowhere to run or hide once her bodyguard Tamina and her teammates have gone. I also expect Eva and JoJo to do very little, Kaitlyn to show disdain towards AJ and Tamina to be shockingly eliminated.

Steven: With Total Divas back from hiatus and doing fantastic in terms of ratings, I think the outcome of this match is obvious. My money is on Team Total Divas picking up the win, and Natalya and/or Brie Bella being the survivors for their team, earning a title shot in the process.

Note: We’re keeping a record of our Pay-Per-View predictions. Check out Team Diva Dirt’s PPV Prediction Scoreboard after the match to see who’s in the lead!