Night of Champions Predictions: AJ Lee vs. Nikki Bella vs. Paige for the Divas Title 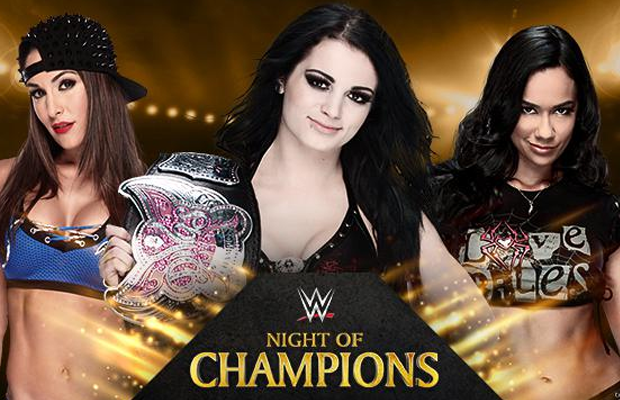 Tonight at Night of Champions, Paige defends the Divas Title against AJ Lee and Nikki Bella in a Triple Threat match. Will Paige beat the odds? The Diva Dirt team weighs in:

Adrian: My heart says either Paige or AJ need to win this one, but my head says it’s going to be Nikki. She’s got the backing of The Authority and the Divas title would serve to rub even more salt in Brie’s wounds, while Paige and AJ have all sorts of other things going on that they could be feuding over without resorting to hot-potato title changes. Hell, a loss for both of them could even lead to a reconciliation of sorts – there are quite a few possibilities here despite the limited material all women involved in this are working with. Anyway, I’m going to go out on a limb and say Nikki Bella wins. It won’t be clean though.

Bobby: This is pretty interesting as a whole, especially because of the Brie Bella factor. For some reason she was never added to make it a Fatal Four-Way — perhaps so she doesn’t get to come in contact with Nikki until their ultimate one on one match, but I have a different theory. I think she’s going to run out with the ref distracted by Paige on the outside. Then AJ will hold Nikki up and Brie goes in for the swing just like Nikki did at SummerSlam… only Nikki moves out of the way and she clocks AJ. Brie gasps, looking shocked… until she then turns to Nikki and they both smile at each other, Brie exiting the ring and hiding on the outside as Nikki Bella crawls over and the referee comes back in to count the pin. It will then be revealed The Bellas were in cahoots with Stephanie McMahon all along because they’re not just Divas… they’re reality stars who have single handedly carried Total Divas to three seasons of success and they felt they weren’t being given the right opportunities when it came to the championship. In turn, they became the exact face of the Divas division that Stephanie wanted. Not a Paige. Not an AJ. But Total Divas stars: The Bella Twins! They can then reign over the division for a few months and then real tension starts to build around January which could save their feud for Mania without it getting stale, also making note of how all these Jerry Springer etc segments were part of their master plan (so that the real feud can seem more legitimate down the line). Phew, okay… I’m done now so let’s watch as absolutely none of that happens and I have the most far out there prediction ever.

Chris: I’m really interested to see what these three will put together. While short, I enjoyed Paige and AJ’s match at SummerSlam and Nikki Bella has improved tremendously in the ring in the past year or so. I’ve enjoyed the way they have intertwined the storylines and I’m interesting to see what role Nikki’s sister, Brie will play in the match-up. As for the victor, I think it makes the most sense that Nikki Bella walks away the new Divas Champion.

Cryssi: Like usual, I’m going into this having not seen anything WWE related since SummerSlam (unless Total Divas counts). So I think what I would to see tonight is Paige retain the championship because Brie somehow costs Nikki. I doubt this happens because it looks like Nikki versus Brie for the championship is inevitable, but I think Paige needs the title more than anyone else in the match because it makes her relevant and in turn, she makes the title relevant. The Bella twin feud doesn’t need the championship, it can stand alone. I would love to see AJ and Paige go on longer, and I’d love to see other girls inserted into the picture because we all know now that the WWE is capable of putting on several different diva storylines at once. So my pick is Paige, although I don’t see it happening. Let’s hope I’m wrong :-)

Eleri: I would love for my queen, Nikki Bella, to take home the win. But I feel like the safe bet here is either Paige or AJ. I’m leaning towards it being AJ, what with how quickly Paige beat her and I don’t think that rivalry is coming to an end any time soon. That said, I think the rivalry can go on minus the championship, whereas I feel Nikki vs. Brie is dying a slow death. As much as I love the Bellas, the feud is struggling to live up to expectations. You know what? I’m going for the wild card and saying Nikki Bella for the win, setting up a Bella Twins title match. I’m prepared to be totally wrong, and I expect Brie to interfere, but you never know.

Erin: While both the Bellas feud and the AJ/Paige feud have left a lot to be desired, I think it’s clear that the emphasis has been on the Bellas side of things. They’re what brings Stephanie McMahon into the equation, after all. I think Steph will play a big role in this match, as she obviously booked it with the intention of nabbing the Divas Title for Nikki. The question is: will her plan succeed? I think it will. By some screwjob-y method, Nikki Bella will walk out with the Divas Championship, Stephanie hopefully bestowing on her some of the heat magnet mojo that made her such an interesting Women’s Champion back in the day.

Jack: My head says Nikki Bella will take this and my heart says that Paige will win following Brie interference. AJ definitely isn’t winning though. She’s getting the title later on down the line in a feud with Steph. I think Paige will eventually drop to Nikki yet now isn’t the time. Brie vs Nikki needs to develop more to put both over and make both more legitimate contenders. Paige retains.

Jake: The Divas Championship has been getting a lot of kissing action lately…lucky girl. With three gorgeous women wanting to keep that title it really could be anyone’s after this Sunday. My money is on the woman that Stephanie McMahon is personally endorsing, Nikki Bella. You don’t help the principle owner of the company win a match at SummerSlam and not get anything back. I feel AJ and Paige are so involved in taking each other out that they’ll be too distracted to really keep their eyes on the prize in this match. Nikki is definitely going to win but the victory is going to be sketchy. I wouldn’t be surprised if Stephanie comes out and rules this match a count out or DQ victory for Nikki. I definitely see Nikki Bella winning the title by Brie’s interference backfiring and Stephanie awarding Nikki the belt due to a “DQ” which is impossible in a Triple Threat…but let’s be for real, Stephanie can do whatever she wants.

Josue: I have a gut feeling Nikki Bella will walk out as the new Divas Champion at Night of Champions! She’s the wild card in this match and with her ongoing feud with her sister Brie, I can see a title change being done to add more depth to the sister rivalry.

Steven: This one is hard to call, since essentially it is the merging of two separate storylines, so let’s take this one step at a time. First of all, I don’t really see Nikki walking out of Night of Champion with the title. I predict Brie will make an appearance, ultimately costing her sister the championship and leading to a one on one match between the two. As for Paige and AJ, the two Divas have been been playing Hot Potato with the title ever since AJ’s return, and I see this rivalry having one more big match before everything is said and done. I expect Paige to retain by pinning Nikki Bella, leading to one more singles match at the next PPV.