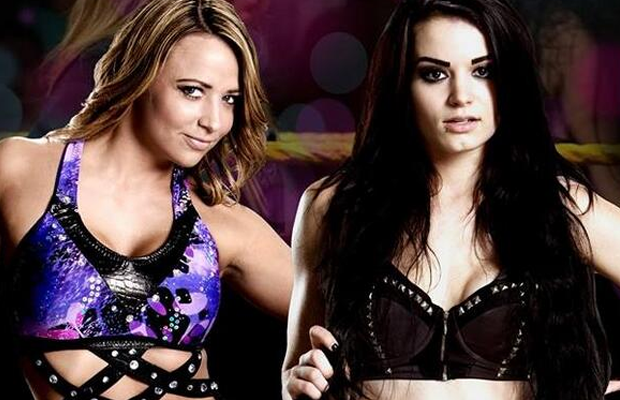 Tonight at NXT ArRIVAL, Paige will put her NXT Women’s Title on the line against Emma. Will the inaugural champ drop the title? The Diva Dirt team weighs in:

Adrian: Emma’s tenure on the main roster so far hasn’t exactly been perfect – so far she’s ticked both boxes of the two laziest clichés WWE give to their women, romance and dancing – but she’s performing her role with relish, had a really good match against Summer Rae on Raw this week, and seems to be getting over. Paige, on the other hand, has been nowhere to be seen recently for one reason or another, and as such has far more to lose. The reality is that now Emma’s been called up, she simply doesn’t need the title (and given how shallow the talent pool on the main shows is she’s probably even a good bet to challenge AJ for the Divas championship soon), while Paige needs another big title defense under her belt to solidify her position as NXT’s top woman and regain the momentum that’s been lost during her absence. Paige to retain in what should be an excellent match.

Bobby: I’m so mixed on what I want to see happen on this. If you would’ve asked me mere months ago, I would’ve 100% said I wanted Emma to win. She’s one of my favorites in NXT and I’ve been rooting for her to be next in line after Paige since before the title was even a reality… but now she’s on the main roster. I know that doesn’t really matter when it comes to NXT tapings, but if she wins it that hurts the belt from being able to be used on live events etc, as she’ll be on the road with WWE like Summer is. I think Emma should have been champion, but the time may have passed now that she’s on TV. Paige desperately needs something fresh though. I’m excited to hear her new theme as I’ve heard good things said about it, but part of me has always wanted her to be heel. The only problem though is that leaves Bayley as the only face who isn’t on the main roster. Nevertheless, I think I’ve rambled on enough for now. As for what I want to happen, I guess I have to say I want Paige to retain only because of the fact putting the title on someone who’s already on TV isn’t something I personally want to see only for the sake of the belt not being able to be used to its fullest. Perhaps Paige could move on to Charlotte, Sasha or Bayley, but whatever happens I’ll be happy. Either Paige retains and the reasons I stated above please me (plus I love Paige also so I’m not knocking her in any way), or Emma wins and my inner Emmacrat self who waited a dang year for her to report to Florida will celebrate like I just won the lottery even if it means the belt isn’t featured as heavily as it could be. And the match should be stellar to boot so it’s a win-win-win!

Chris: Woah, I am extremely excited for this one! You’ve got the two top Divas of NXT battling it out in a historic rematch for the NXT Women’s Championship! I must say I’ve been waiting for NXT ArRIVAL ever since it was announced because you know with these two your going to get a match that doesn’t disappoint ( Look at the first match between these two!) It’s had a tremendous amount of promotion and I can honestly say I’m more excited for this than any Divas Championship match in a long time. I think it’s time for Emma to win the Women’s Championship, but I’m predicting that she doesn’t get to celebrate for long as Paige turns heel and attacks her after the match. P.S. – excited to see Paige’s new look!

Cryssi: First I don’t care who wins this match because I’m so excited it’s happening and on such a big show. Emma and Paige are so equally good at what they do that I know they’re going to put on a show tonight that’s beyond anything they’ve done so far. It’s hard to judge who will win because I don’t know what direction they want to go in with these two girls. I want to follow my heart and say Emma but I’m going to go with my head and say Paige retains. Either way I’m just excited for this match and can’t wait to watch it. Good luck ladies.

Erin: We talked about this a lot on Diva Dirt Weekly: with NXT coming to the WWE Network, more fans will have access to it. I think, with that happening, they’ll start to acknowledge it more on the main roster. That’s why I think it would be beneficial for the WWE to put the title on a Diva already appearing on Raw and SmackDown. Obviously, that’s Emma. She wouldn’t necessarily carry the title around on the main roster, but I think mentioning that she’s the champ would help bridge that gap between the divisions and pull in more viewers for NXT. Not to mention the fact that dropping the title would be the perfect opportunity for Paige to turn heel and free her to make the main roster jump. Even if she loses, she wins. Therefore, I’m betting on Emma.

Jack: As biased as it may sound, I’m firmly with Paige on this one. It makes no sense to give Emma the belt now that she’s on the main roster and Paige needs a big win to re-affirm herself in the NXT Divas division. Weird saying that considering she’s the champion, yet with undisclosed injuries and a packed roster delaying her presence on TV, she needs a big win to solidify herself as a major player to fans of old, and new fans that are just tuning into NXT for the first time on the WWE Network. I’m predicting Paige will win thanks to a Paige Turner from the second rope. After that, I’d like Summer Rae and the BFFs to attack her, setting up a Title vs. NXT Career match for Paige and Summer, resulting in Summer leaving NXT and allowing a new girl to shine as part of the BFFs. Oh, and then Paige can turn heel and feud with Bayley before joining the main roster. Please and thank you WWE!

Jake: I’m predicting Emma will walk out with the victory on this one. Let’s face it, she’s a hot topic right now but unfortunately I fear she may get “Jillian Hall Syndrome” and not be taken seriously. She needs a big victory to really get herself over with the non-NXT fans as a serious wrestler. This would be exactly the victory on a huge stage to get the crowd into her seriously. If used correctly, Emma could be huge in the Divas division and this victory is crucial to making that happen.