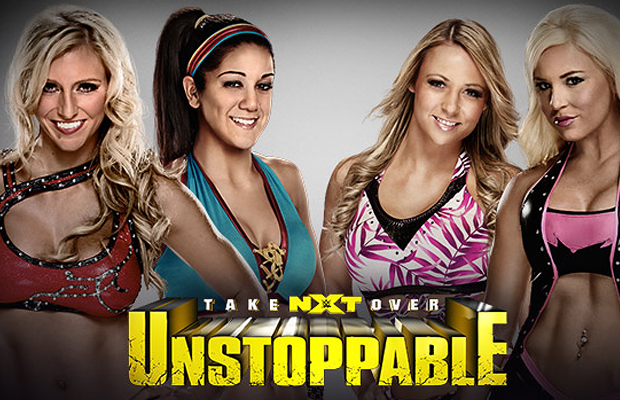 Chris: I wasn’t quite expecting a tag match on this live special but I’ll take it! It’ll certainly be interesting to see how Dana Brooke does in her first live special, and how Emma works in such a big match as a heel. However, I see Bayley and Charlotte walking away with the win in what will probably be one of Charlotte’s final matches in NXT.

Erin: Charlotte has got to be knocking on the door of the main roster, right? She’s got nothing holding her to NXT. This match may very well be her NXT swan song, and even if it’s not, I don’t see the WWE booking a soon-to-be main roster Diva to lose this close to her call-up. Poor Emma, even though she is a main roster Diva, wouldn’t exactly be hurt by a loss here. I see NXT going for a feel-good moment here and have Bayley and Charlotte pick up the win. Here’s hoping Dana takes advantage of this moment and proves herself worthy of the push she’s been given.

Jack: Emma turned heel and has so far had no success whatsoever, losing to everyone and their mother. She has to win tonight to solidify her turn otherwise she is as much of a joke as she is on the main roster. And as for her character? Why would she preach to Bayley to turn against the fans if doing it has done nothing for her? All of that, plus the fact that Dana is new means I think Dana and Emma will win.

Jake: Ugh, did we really need to make this match a tag team match? I was really looking forward to seeing a one on one encounter with Emma and Bayley, especially with Emma’s recent mind games. While I love Charlotte’s work I’m not really sure what warrants Dana Brooke getting a big Takeover match so quickly after her debut. They’re pushing her pretty hard and I have a feeling it might backfire, especially with the NXT audience. I don’t see Charlotte sticking around in NXT too much longer so I’m guessing Bayley and Charlotte will be victorious tonight with Charlotte getting a submission victory on Emma for her team. I wouldn’t be surprised to see Dana Brooke beat down Emma after the match for the loss and get saved by Bayley, sending Emma back to the main roster.

Josue: This tag match came as a surprise to me. While we’ve seen tension brewing between Bayley and Emma (who has been playing a different night and day character when compared to her role on the main roster) for weeks, we’ve only up until recently seen Dana begin to take jabs towards Charlotte. While Dana may find herself furthering her feud with Charlotte, I don’t see Emma making frequent guest appearance on NXT after this, as her coming back may have just been to help Bayley display a more serious persona. With that said, this tag match is a smart way to incorporate two feuds at once but will ultimately end with the Huggable Superior Team of Bayley and Charlotte getting the win over their opponents.