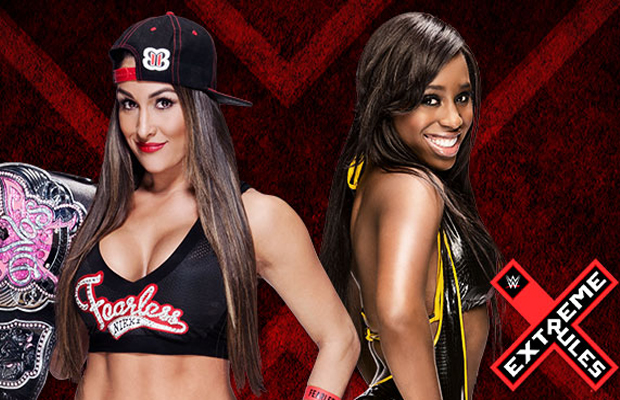 Tonight at Extreme Rules, Nikki Bella defends the Divas Title against Naomi. Will Naomi’s new attitude propel her to the top? The Diva Dirt team weighs in:

Bobby: Naomi wins because Leyvonna got released so I hate wrestling right now and the wish I’ve had for 5 years coming true would possibly make me hate it less. Maybe.

Chris: I’ve enjoyed the tremendous long running build up for this one! Wait, you can’t note my sarcasm via text? It seems like this month has been full of face and heel turns without a ton of explanation or reasoning. Sure, Naomi’s heel turn was a great moment and she’s shown tremendous viciousness since doing so but I have to question the logic of it all. You have Naomi turn heel to write off Paige and then face the Bellas who are now randomly faces? Oh wait, I forgot – it’s the Divas Division. WWE thinks it doesn’t HAVE to make sense! I see. Nikki Bella wins.

Cryssi: More than anything, I want a great, solid match with a nice amount of time for two deserving, amazing girls. Nikki has been an incredible champion thus far, and Naomi’s turn and attack on Paige was everything. As Bella biased as I am, I think it’s only fitting that Naomi wins the title tonight. She’s more than ready for this, and I think I speak for everyone when I say that Naomi is more than deserving of this opportunity. She can feud with Nikki and Brie a bit longer, and set up Paige’s eventual return to the roster. A feud between Naomi and Paige will be exciting and I can’t wait to watch it play out.

Eleri: I’m expecting a sort of double turn, I guess. Naomi has already gone heel, and when it’s heel vs. heel who is the crowd supposed to chant for? The Bellas are over – that’s fact. They have a huge following on multiple platforms, and they’ve both worked their asses off the last year. That gives weight to my theory that they’re going to turn face. We’ll have to wait and see, but it would certainly freshen things up in the division. With AJ Lee gone and Paige on hiatus, thanks to Naomi, there really aren’t many active faces at the moment. The Bellas have been in the spotlight longest, so logically they’re the way to go. As for tonight, my pick is Nikki Bella. I expect a clean win, and then a beat down from Naomi, prolonging the feud.

Erin: We’re in a unique situation here, with both sides of a match in the midst of switching their face/heel orientations. No one’s really settled in their new roles yet, though Naomi is definitely about to hit her stride. Tonight might be that moment, in fact. This is her chance to prove that she deserves to be at the top of the division. However, I don’t think she’ll actually capture the gold here. Things are still in flux, and I’d hate for her to be treated as some transitional champion, holding the belt until Paige comes back. I think this match could be used as a way to solidify both Nikki and Naomi’s new alignments, Nikki Bella winning in some manner that’s not cut-and-dry, leading to Naomi displaying some heel frustration and drawing babyface sympathy for Nikki and Brie. Let a loss here fuel her fire leading into the next PPV, where she finally wins the belt. It will mean that much more when that time comes.

Jack: Who would have thought we would be seeing a heel Naomi vs. face Nikki Bella at Extreme Rules?! Whilst the match was impossible to predict a few weeks back, the outcome of this is seemingly obvious. I think Nikki will retain her title, only for Naomi to cement her heel status further by assaulting both Brie and Nikki after the match. The match is the only one not to have an extreme stipulation or unusual aftermath (see the “Kiss Me Arse” match for that) so why not have Naomi get a little hardcore once the match is over? Nikki Bella wins. Naomi snaps.

Jake: Poor Naomi. Every time she gets a push the timing sucks. This PPV is another example of that. Tonight is a lose/lose for Naomi. If she wins the title it will be a totally rushed situation. Sure, she’ll be champion but there has been no time to build her up as a credible heel and also no time for the Bellas to be believable faces. If she gets the gold I don’t expect her to hold it long. And if she loses it will kill her momentum as a heel. There’s just no possible good outcome for her except one and my prediction. Nikki Bella wins by DQ. Naomi is just too vicious in the match and beats the hell out of Nikki and Brie forcing a DQ. This way Naomi and Nikki can build up more of a feud and project them further in their new roles. Layla really should be getting the title shot, bleh.

Josue: Despite how this match was announced, I’m glad to see that we are in fact getting a Divas title match. Although Paige may have won that number one contenders battle royal, Naomi really was next in line for a title shot for her continuous wins over the Belllas, more so now that there is meaning behind Naomi’s newly Heel persona. With the Bellas transitioning to Faces by default, I think there still needs to be time for the both Nikki and Naomi to build their recent turns and add more depth to them to their characters. I think Nikki Bella will retain after Naomi gets disqualified, adding another layer to Naomi frustration while also garnering sympathy for Nikki.

Steven: FUNK IS ON A ROLL!!!! Naomi has a new attitude, and she is on a mission to become the champ… but I don’t think her time is just yet. With this new cocky persona she’s sporting these, I would love to see her pride and ego get the best of her, costing the match. Afterwards, she could snap on The Bellas Twins like she did Paige, which will solidify their positions as babyfaces (WHEN DID THIS EVEN HAPPEN?!?!) and Naomi as a heel. I see Nikki Bella retaining the title tonight, but I wouldn’t be surprised to see this feud carry over to the next PPV.